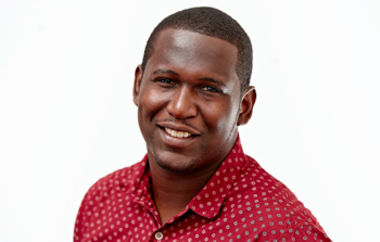 Renaldo’s interest in the area of agro-environmental science was sparked after witnessing the effects of slash-and-burn land clearing and intensive tillage on the environment while growing up in Trinidad and Tobago.

Current position: Research Assistant at the University of Guelph, Canada

Renaldo’s research has focused on the use of conservation agriculture practices, which conserve the soil, reduce greenhouse gas emissions, and ultimately lower the cost and physical demands of crop  production, which allows for a greater participation of women in agriculture.

2016 Conservation Agriculture for Climate Change Adaptation in the Caribbean Research Grant
2015 Award of Excellence for Research, Faculty of Food and Agriculture, University of the West Indies, Trinidad and Tobago

University of the West Indies, Trinidad and Tobago

Renaldo works with smallholder farmers to implement sustainable agricultural practices that increase climate change resilience. He founded a start-up that aims to conduct applied research in the service of famers and provide soil management recommendations.

Renaldo grew up in Trinidad and Tobago, where he realised from an early age the devastating effects of slash-and-burn land clearing and intensive tillage. The damage these techniques caused included landslides and floods. He observed that smallholder farmers in the Caribbean were among the most vulnerable to the negative economic and environmental effects of climate change. At the same time, the agriculture sector employs a large proportion of the population in the Caribbean.

With a new approach to farming, Renaldo wants to help reduce the risks for the farmers of being affected by climate change. His research focuses on instituting conservation agriculture practices (jab planter direct seeding technology) which isolate carbon and reduce greenhouse gas emissions. This approach will also reduce costs and the physical demands of crop production, to allow for a greater participation of women in agriculture. Renaldo studied environmental and soil science, agriculture and climate change and holds a Master's degree from the University of the West Indies.

By developing recommendations for land use and mobile applications for farmers across the island, Renaldo is changing farming methods in his country. His interdisciplinary approach considers the impact of interventions on the environment like soil quality indicators and greenhouse gas emissions, storm susceptibility and soil infiltration, economic (net revenue) and labour requirements (calorie use during cultivation). Therefore, Renaldo’s work integrates agricultural science, economics, labour studies and climate change intervention. This provides a platform for Caribbean farmers to increase production, thereby increasing wealth without placing onerous limitations on the availability of environmental resources for the future.

The jury praised Renaldo’s interdisciplinary approach to improving farming methods in the Caribbean, and the fact that his project aims are an important contribution to sustainable agriculture around the world.