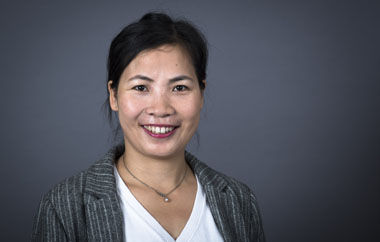 In her PhD thesis Shujuan developed an innovative way to reduce the loss of nitrogen and phosphorus from paddy fields in Northeast China using these fungi. During that time, she also studied the carbon and nitrogen economy of plants at the Australian National University, Australia.

With an intention to focus her research efforts on decontaminating the water around China’s paddy fields, Shujuan Zhang’s study is both China-specific and can also be implemented around the world.

Rice production is still a key aspect to China’s agricultural industries. This grain remains a staple of the Chinese diet. However, the paddy fields in which rice is grown are susceptible to excessive fertilisation, leading to a spike in nitrogen and phosphorus output. When the level of these elements in paddy fields gets too high, they can lead to water pollution of the surrounding area. In her PhD research, Shujuan is developing an innovative way to reduce the amount of nitrogen and phosphorus through use of a fungus (arbuscular mycorrhizal funghi, AMF).

Shujuan’s studies have taken her from China to Australia. While studying on a two year scholarship at Australian National University, Shujuan made excellent progress in her field. Her supervisor in Canberra, Professor Owen Atkin believes that the skills she developed in Australia have set her in good stead for further studies. She has also received grants for her crucial work from both the UK’s New Phytologist Trust and the Chinese Scholarship Council.

What attracts Shujuan to working in Germany is the country’s sincere attitude to tackling issues of nutrient contamination. Shujuan maintains that, as a scientist in the early stage of her career, collaboration with established German researchers would be a brilliant learning opportunity for her: “Scientific collaborations are some of the best ways for scientists to broaden their experience and establish new professional connections. As an earlier career researcher, I am keen on establishing scientific collaborations in Germany due to its leadership in sustainability.”

The jury was particularly impressed with Shujuan’s willingness to take on such an extensive, labour-intensive research project. Her project aims are very clear and a successful outcome will be invaluable for China’s water ecology.